1.  I am happy. Calm. Peaceful. And so grateful that cruel, oppressive heat has lifted a little.

2.  Thinking of my Dallas friend Jen Austin this morning... and her ex-partner Angela, their 3 amazing young daughters... Please give them all an extra big dose of love, Lord. Three cute littles now growing into distinct little people, forming their own individual personalities and opinions. No matter what else, I pray they would know You. Your love. Your unwavering trustworthiness. Amen.

3.  The past couple of nights, we've kept all 3 pets out of the bedroom because Lena says Luna's odor has become quite a bit too much for her to tolerate. I don't really smell it, but I respect my dear love so the pets have been sleeping together in the hallway and the living room. Not surprisingly, the pets have responded in their own little passive aggressive ways by leaving pillows and pillows worth of shedded hair and fur for us to clean up every morning. Ha ha ha

5.  I have been reading a book about Psycho-something-or-other Non-epileptic Seizure Disorder. This condition is currently being managed by a low dose of generic klonopin. Some doctors have told me there are ways to manage this condition and not take anti - anxiety meds. So I am reading this book to learn about how I might do that. The more I read, see more surmounting and challenging this in vision quest becomes and honestly it is making me tired. I would almost rather say screw it and just keep taking the meds. The problem is that my insurance company is really being a pain about paying for my visit to my Neuropsychologist, Dr. John Bolter. Cigna claims counseling is not covered on my policy. However, I do not see Dr. Bolter for counseling. I see him to get refills of my needed prescriptions. It could be said that this situation with said insurance company is quite counterproductive toward my recovery because they are causing me increasing anxiety over their assholeness. Maybe I can just start seeing a regular neurologist to get my prescriptions because that way there would be no mention of the illegal term psychology. Or, I could just see a primary care physician, pay a lower copayment. Get my prescriptions and be on my happy little way. I just like talking to Dr. Bolter because he is a specialist in this field and can answer my questions more concisely.

6.  I guess I had more on my mind then I realized, haha! Sorry this is turning out to be more of a bitch session then a simple recording of my thoughts. Well, this is me. Ha ha ha. I love Lena and I am ever grateful for her as the best part of my life. My favorite part of everyday is coming home from work to be with her,

7.  And, lastly there is a woman who has been a part of my life for a long time, maybe 20 or 30 years. I initially knew her as Carol Winn. Time and years have passed and now she is Callie Winn Crawford. When I was 11 or 12, I just about wanted to be this woman when I grew up. Haha. However, reality has taken its course and I have become me and she is still her, which is, after all, the best way for things to be. She is now retired from the United Methodist Church where she served in numerous churches for many years as  a caring and inspiring pastor. Ihave heard hundreds of her sermon. Recently, she has published an online collection of sermons called "Sermons From Below Sea Level".  These are sermons from the time directly following the onslaught of Hurricane Katrina in 2005. What stands out to me as I now read the sermons is the skill and artistry with which they were written. Listening is one thing, reading give me a much greater, deeper insight into what Carol / Callie was trying to say, to convey. Her writing is truly art, poetic almost, using rhymes and alliterations, descriptive and precise vocabulary, metaphors and similes to form a virtual painting with her words. A painting full of color and contrast and detail that one could stare at for hours and hours, seeing nuance after nuance and depth under depth beneath depth. I want to continue reading the sermons, absorbing as much as I can while also learning from her writing techniques. I am amazed and very impressed. Can I pick a role model or what? Haha

My wish for everyone who has suffered through reading this long blog, haha, is that you have a fantastic and relaxing weekend.

Until we meet again! 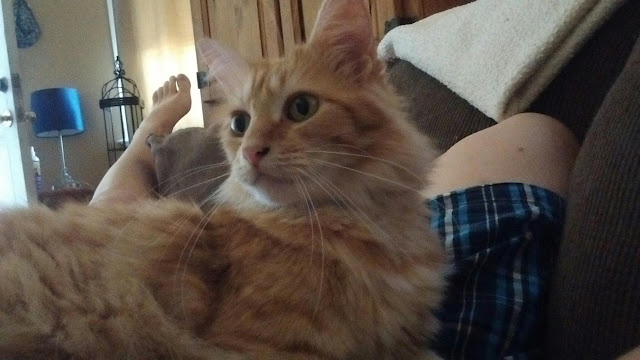 Hello there. Just sitting on the love seat this morning next to my actively - grooming cat Leroy Brown Fontaine. I am enjoying this time just taking it easy with my Lena and my furbabies.

Not feeling overly - inclined to go to church these days... Can't really explain why, it's more that I'm just happy at home. I love God, God loves me, I talk to God and vice versa... I read the Bible, Lena and I discuss the Bible together. I guess that might sound like I'm trying to justify my not going to church, but I'm really not. Just explaining my thoughts.

I appreciate a format to share my thoughts, document what goes on in this head of mine, and maybe just kind of paint a picture of my life that someone else, somewhere, might enjoy viewing.

Yesterday, I was at work for 9 hours. Actually a little more but anyway... I did lots of physical work - climbing up and down ladders, emptying shelves of glassware, cleaning the shelves, and putting the glassware back in a somewhat more organized arrangement.  It was pretty cool, no one bothered me all day and that was awesome, hahaha.

I had my little CD player in the room where I was working and I finished off a book on CD I've been listening to about the role played by new immigrants to the United States during the First World War. I enjoyed that book on CD, and really have a greater appreciation for immigrants and their contribution to the strength of our country.

I have nothing against President Obama's actions taken on immigrants. I think that has to do with my attitude toward animals, haha. If I could, I would take in every stray animal and house it and feed it and love it. Of course, that's not practical and I believe that Lena would probably pack up and leave, haha... But that's my attitude toward people, especially from Mexico. People come here because they are needy and we have so much abundance in this country. Let them stay! Let them stay and have a safe place to live, probably nicer accommodations than they had before, cleaner drinking water, etc etc. Just let them stay.

I bet some people might disagree with my viewpoint there, but that is what I think. People should be able to agree to disagree.

In other news, Lena was just brushing Hippie with a large paintbrush. I thought that was kind of funny. Might make a funny cartoon drawing; painting the cat, haha.

Lena had a contractor over here yesterday to discuss how to make our oven-like living area more livable. We thought we just needed a larger air conditioner unit with more BTUs, but he said we could put as bigger a unit in the wall as we wanted and it still wouldn't make a difference. He said what we needed was a good ceiling fan to circulate the cool air, and he would install it for a labor charge of $110.

We think that's awesome and we are going to speak soon to our landlord and ask him if we can buy a fan, have it installed, and take the expense out of our next rent payment. That's kind of the way were having to do things with this landlord. He's not that much of a get-up-and-go kind of guy haha but, if we do the legwork on needed repairs or tweaks in this house, mostly he thinks that's great.

I am omitting here my thoughts about how it takes a woman to get things done in this world because men can be very lazy haha that was rude; maybe I should take that out... but Lena says leave it so I will! Anyway that's the truth from my vantage point.

I'm so glad the temperature is somewhat regulating here in Louisiana. South Louisiana, that is. For the past week or even maybe 2 weeks its been in the 100 degree range, with heat indices up to 115! That is crazy psycho ridiculous. This week, the highs will only reach to the low 90's, and that is beautiful and wonderful and something for which Lena and I are both extremely grateful. Maybe we would not appreciate highs in the lower nineties as much if we had not experience that period of such extreme heat.

So, that's the news from Lake Woebegone, where are all the lesbians are strong, all the gay men are pretty, and all the furbabies are above average. Later, friends. :-) 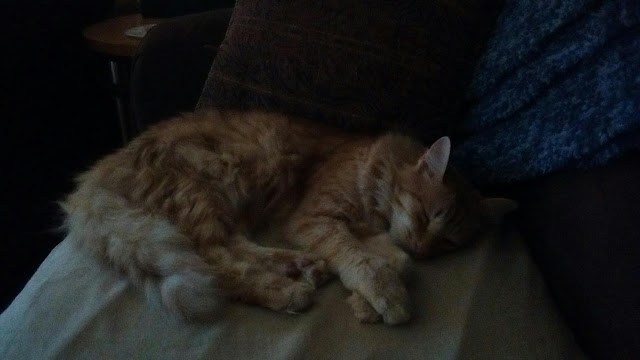 Increasingly, I am finding myself not oriented to time or date or place. Its just every now and then, and it only lasts for a moment, but I find it unsettling. I wonder if that is what it's like to have Alzheimer's. I worry about Alzheimers, maybe more often than I should, but my grandmother has it... and my neuropsychologist said that I am at greater risk to developing Alzheimer's because of the traumatic brain injury I experienced when I was 16. Coma, hemiparesis, amnesia, the whole nine yards; it was grand.

I wanted to go ahead and document this as I experience it so that, just in case I end up with Alzheimer's one day, haha... there will be a record of the path I took to get there.

Sometimes I will be in a bathroom stall at work and I'll look up and it will take me a minute to remember where I am and which building I'm in. Sometimes, I wake up and I'm not sure which day it is. I know this is probably very common but I just wanted to make note of it. Sometimes it's like I'm waking up from a dream and things are foggy. I have to sort out what's real and what's not.

I hope I'm not over-dramatizing this. It only happens... maybe less than once a day... and the state only lasts a few seconds. Just documenting, for my own purposes, and maybe for the purposes of someone else someday. Who knows?

I bet some might say, "Oh, that's normal, that's just part of life," but this is MY life... and I'm just recording my thoughts.

I heard a program on the radio the other day that discussed all these new, different strategies to strengthen your brain and to fend off senility. Basically what they said was, most of that theory is bunk and the best way to fend off senility is to stay involved with social groups and join in activities with other people.

My opinion? Everyone has their theory. And I think that I could do every one of these suggested preventitive techniques and it may or may not help... But what I know I can trust is the faithfulness of God. So, as I experience life and attempt to document my experiences as precisely as possible, I am also trying to continually give it up to God and trust that He will take care of me no matter what happens to my physical body. 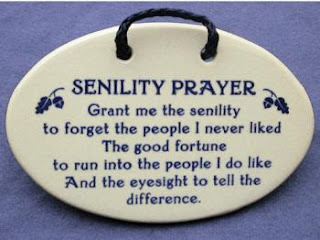