As in, literally; two night ago, I dreamed I was in prison.  Get comfortable; this is sure to be  a riveting story.

At first, it was Lena who had been sentenced to prison.  We went to drop her off there at whatever women's prison... and I kept saying, "Baby, it's okay.  I love you so much.  You will get through this, and I will be waiting for you when this is over."  And I MEANT it.  No qualms, no second thoughts; I love her, loved her too in the dream, and she's my person.  Of COURSE I would be faithful and wait for her; no question about it.

Lena kept saying, "No, baby, you deserve to be happy and free.  I'm sorry, I'm so sorry, but I will be in here for six long years and you deserve more than that."  I was so brokenhearted that she would say such a thing and not believe that waiting for her would just be a natural behavior for me.

Then, in the dream, things turned and I was found to be responsible for whatever wrong that had been committed.  Lena was released, and I was put inside in her place.  And I felt exactly what she had been expressing, and she felt exactly what I had been expressing, when the situation had been reversed.  My heart was twisted just as hard on both sides of that situation.  I was able to more fully understand both points of view.

In my dream, the prison was actually a pretty peaceful place, with the (cell block??) being a large room, lit by a giant skylight in the high ceiling.  No harsh lights; just soft natural lighting.  Who knew; a prison with a lovely atria in the center!  In there, of course I felt scared to death but I think that had more to do with the fact that I was in a new and unfamiliar situation.  It was a decent, basically livable place.  I know real prison is not like that... but I "made this one up," you could say, so it ended up being pretty nice.

Two people to a cell in bunkbeds.  The bars of the cells were painted white and were rarely not left open.  The cells were along one side of this large room; the rest was filled with cafeteria tables, large sinks along the far edge, and few noticeable people.  It was calm and actually soothing.

When new inmates showed up, their new cellmates would stand outside the cell entrance at attention with their shoulders perpendicular to the bars.  When the new person walked up, this person would welcome them in a "taking them in" kind of way, assuring them not to worry and that everything would be okay.  In an "arm around the shoulder" way.

When Lena had been the inmate, she had worked in a little garden area off the side of the building.  Maybe a greenhouse sort of indoor place.  She had collected a whole lot of (something good to eat, maybe a sweet fruit??) and had placed piles of this near the cells on various tables.  Which is SO Lena; she loves to do nice things for people as small tokens of kindness.  The other inmates thought she was weird for doing that, at first, then came to appreciate her efforts.  She told me, "That might not be your way in, but it definitely worked for me.  Just an idea."

I must note, in the dream, sometimes Lena was Lena and sometimes Julianne Moore played the part of Lena.  Very surreal.

My my my.  What dreams we each see.  I've often imagined writing a novel where the main character stumbled from one dream situation to the next.  I'm not sure if the character would intermittently find reality or exist always in these states of confusion.  Also not sure what would be the climax of the story or how it would end.  But, yeah, might be a decent idea.

I know it's been forever since I've written.  Nothing to jog my desire to write like a strange dream.  haha

Branch Off of a Monent

"Deeper and deeper in these quiet times
Everything in Your heart, please make it mine
Thank You for loving me, giving me breath
I want to walk in the path of Your steps."

--Nicole Henderson
June 11, 2020
a prayer that was sung
in a quiet patch of time
seeking mindfulness
seeking to know God better
my Abba, my Papa
I will celebrate my Papa this Fathers' Day
- June 11, 2020 No comments:

I just read, in Genesis 21, where Abraham planted a Tamarisk tree at a place he named Beersheba.  The tree was planted to mark the place where he had made a covenant with Abimelech, a king from the Philistines.

I was curious, so I dug and learned about Tamarisk trees.  Wanted to share what I discovered because it was very interesting.  (Down here in the land of cypress, oak and pine trees, I had never seen a Tamarisk tree.... LOL)

Here is are clippings  from https://ww2.odu.edu/~lmusselm/plant/bible/tamarix.php and then from https://www.discovermoab.com/tamarisk-tree/ - so you can read more if you like.  I will include some pictures at the end.

"Attractive pink or white flowers are produced during the winter, although a tree may flower any time during the year. The fruits are wind dispersed but the tamarisk is easily propagated by cuttings."

"Tamarisk (also known as salt cedar) is a deciduous shrub or small tree from Eurasia. Tamarisk can grow as high as 25 feet tall. The bark on saplings and young branches is purplish or reddish-brown. Leaves are scale-like, alternate, with salt-secreting glands. Flowers are small and the petals are reddish, pinkish, or white. Each plant can produce as many as 500,000 seeds annually. The seeds are dispersed by wind, water, and animals. Seeds are small with a tuft of hair attached to one end enabling them to float long distances by wind and water. Seeds are short-lived and can germinate within 24 hours after dispersal, sometimes while still floating on the water." 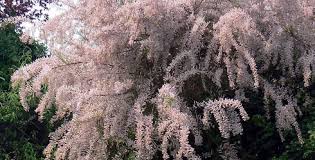