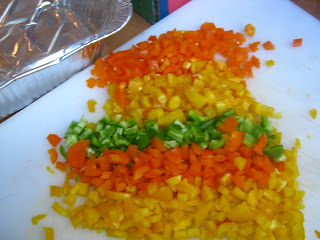 Yes... at 6 a.m. this morning, I found myself under a tent, beside a kitchen on wheels, outside Gate 7 of Tiger Stadium, slicing onions. :) It was a long, very busy day, but I can honestly say I loved it and had a great time!

So I cut the onions, then sauteed some green peppers, then sauteed the onions I had cut along with a skillet of potatoes and a white sauce. At which time a gentleman relieved me of my duty there... of which I was really glad, because it was HOT in that trailer!

So I was back at my table, this time cutting up a bunch of all different colored peppers. I thought they were so pretty, I had to take a picture. *grin* It became a trial of trying to cut them as small as possible, as fast as possible, and not cut any fingers off in the process. I did alright, although I did cut my thumb and ring fingertip on my left hand. It hurts still, ha! But it's all part of the game.

What else did I cut up... I sliced purple onions, shredded enough cabbage to fill up a HUGE tub, and probably some other things that escape me at present. I also pulled pork... for pulled-pork sandwiches... a LOT of pork... lots and lots of slimy greasy pork... but I did taste a bit of it and it sure was good. :)

The catering was for the crews and all the people working to set up and put on this show. The elite starlicious country royalty did not grace us with their presence but, instead, made detailed orders from their dressing rooms. HA- their loss. But now I can say I chopped onions for Keith Urban, Kellie Pickler and Taylor Swift. haha If Taylor Swift even eats... *grin*

At the end of the day, I peeled a bunch of ENORMOUS sweet potatoes... I have never seen any that huge in my entire life! It was a lot of fun and I even got invited to this girl's friend's band's show tonight... riiiiiight... hehe... and also invited to "go drinkin" with Pete, this really cool black guy maybe about my dad's age... which I declined, but in retrospect I could have said no a little more graciously than I did. I didn't freak out or anything, but #1 I don't know this man from Adam and #2 um CARRIE!! Riiight... so he asked me, and for a few seconds I withdrew into my brain to contemplate how to answer this invitation... then just plainly said, "No." He was a lot of fun to work with, and if it had been a group thing I might have been a little more willing... but I am TIRED after getting up at 4:45 and really like the fact that I am at my home, now clean, in boxers and a t-shirt. Barefooted. In a recliner. In the quiet. Sweeeeeeeeeeeet..........

When I walked to my car to leave, my car was not where I left it... apparently, after I parked it at 5:45 a.m., they made their way around to put up barricades indicating that was an EXCLUSIVE lot... and the LSU Po-Po towed my sweet Camaro. Bastards, I tell you. So I walked my tired self over to the campus police station. They would not budge on their charge of $100 to release the car to me.

HOWEVER!! God blessed me with an incredible, wonderful mother who drove all the way out there from Central and loaned me the money, because I was about $97 short of being able to pay the sucky fine. I love my Mama and plan to pay her back and do lots of nice things for her to demonstrate my appreciation.

So now I am home. My back hurts like crazy... I'm going to doctor my little kittens up with their eye medicine and kick back in this chair, possibly atop a heating pad, and CHILL.

All in all, a good day indeed. Even despite the car incident. I had a lot of fun today and look forward to my paycheck this coming week. *grin
- June 29, 2010 No comments:

Chillin in the recliner... the faint smell of cat poo wafting through the air. Watching Obsession on A&E for the first time. I love it. Proving that people who freak out over stuff CAN just GET OVER IT if they just... DO. That concept has always frustrated me; people claiming all this stuff... I suppose it's really real to THEM; I just don't understand personally.

I had a weird dream last night that made me think of the various controlling relationships and "friend"ships I've had in my life. Made me feel angry, remembering... mad at them and mad at myself for allowing it to go on, and on... and freaking ON!! WOW, never doing that again and grateful for Carrie because, with her, that is not ever even ALMOST an issue.